"Put simply, the guests would spend less time and money, we'd make more money, and EVERYONE would have a MUCH better time."

Back in February of 2017, my wife and I were out in Hollywood for a writing retreat.  This was the 1-year anniversary of the writing retreat where we accidentally started our "We Are The Northern Lights" project.  In addition to getting our vitamin D, we spent our days writing, waiting to hear the first mixes of our first EP, and trying to figure out how to spend the summer.  On the table was a vacation, finding another cabin in the woods to write or record even more, or maybe trying to book some WATNL shows.

The top of my list was booking WATNL shows.  I could do my usual "Sheldon Low" summer tour and throw in some WATNL gigs as well.  Given the choice, I'll take a summer tour with Hadar, rather than another one without her, and this was exactly the type of challenge and adventure I love doing with her.  Usually our adventures involve traveling somewhere far from home where very little English is spoken and we speak nothing of the native language.  Learning about the new cultures and being in a completely foreign place and discovering beautiful, delicious, or bizarre places and things is both fun and mind expanding for me.  The tour would be more culturaly familiar, but an adventure nonetheless.

But Hadar wanted to have some more tangible and attainable goals beyond a grand adventure for its own sake.  So we decided to investigate what it would take to do a successful tour.  By successful tour we meant we would want to make back all of the money we'd be spending on travel (rental car, hotels, gas, tolls, food, and alcohol of course!) and on our merch that we would want to have available (CDs, T-shirts, hats, etc).  For me, success meant we'd do so well that we'd be invited back to most or all of the venues.  We had other goals of course but these were biggies and they both meant one thing: getting people to attend our shows, lots of people.

We figured the best way to do that, especially as a brand new band with very little recognition, was to focus on cities where we had a good number of friends and/or family.  So we spent a while plotting a course through the country hitting places like Boston, Piittsburgh, Cleveland, Detroit, Chicago, St. Louis, etc.  Then I began compiling a list of the camps I visit near each of those cities while Hadar began the exhausting work of researching venues and the contact people for those venues in each city.  There's a great site called Indie On the Move which you can use to learn about venues in each city, but making sure you find the right fit and best venue for your music and your performance is a time consuming and brutal job.

The plan was to compile the list of venues and then begin the next exhausting round of tour planning which is to reach out to each of these venues that had never heard of our brand new band, so brand new we had no studio recordings or professional performance videos or other important content, and hope and pray that they'd not only respond to our emails but actually book us.  There are obviously all kinds of venues that all operate differently but by and large, you send a well-crafted (read time-consuming) email to the venue and hope you hear back.  Often you have to send 2-3 emails before you get any type of response, and even if they do, they don't waste any time trying to be polite.  Make no mistake, they are doing you a huge favor by allowing you to play at their place, but instead of the 8PM slot you had requested, they'll give you the midnight slot.  But only if you can guarantee 20 people will attend.  Oh and they'll be taking the first $100 and 50% of every ticket sold beyond that.  On the night of your performance you'll get 15 minutes for the other band to get off stage, for you to get setup on stage, AND for your "'soundcheck" from an angry engineer who seems to have landed the job without any knowledge of sound.  You'll show up on time only to be told they're running 45 minutes late so you need to tell your guests who have work the next morning that you'll actually start playing closer to 1 AM and you only get to play until 1:25 at this point.  If your friends even want to sit down, it'll be on sticky rickety chairs and they'll also have a two drink minimum from the bartender who pays no attention to the fact that you're playing a show whether she's standing directly in front of your mic taking orders or smashing ice as loudly as she can from behind the bar.  You can't hang with your friends and family who came all the way downtown to hang with you because you don't want to be rude to the bands before and after you, and you can't hear them anyway because the PA is up so loud.  Forget selling merch...there's no where to put it, no time to sell it, and no guarantee your merch and cash won't be stolen.  The place smells awful and somehow you only walk out with $50 no matter how many people show.

Ok, I'm exaggerating.  Kind of.  To be fair, these venues are businesses and they're in business to make money and stay in business...not promote your band for free.  They need to sell tickets and drinks and if you've ever worked with musicians and other artist types, you know that 'reliability' is sadly not a word we can always use.  The angry sound engineer is being tasked with an impossible job (6 or more 15-minute sound checks each night) and talent and performances probably vary greatly each night.  If they've seen you bring crowds a couple or more times, maybe they'll be more willing to give you that critical time slot (like a Saturday night) where people are out and when they should RELIABLY make money.  I really am not trying to bash venues...in fact, some of them such as "Rockwood Music Hall" in NYC and "Hotel Cafe" in Hollywood are the exact opposite experience.  But in many cases, it can be an underwhelming experience and a lost opportunity for both the performers and the audiences who show up.

So back to our story.  Hadar and I are looking at the lists of people we know in each town, and how many of them we realistically expect to show up so we can estimate the number of people we can guarantee at each show in the emails we are planning to send to each venue begging them to let us play when she looks up at me and says, "What about house concerts?"

Now I had played a few house concerts already and knew how magical they could be.  And running my own sound and lights, if we even needed them at all, would be some extra time and physical labor at each show (not to mention room in the car) but would also give me much better control over the quality of our sound.  And if we were going to invite the same people whether we were performing at a venue or a house concert, we'd have a better chance at covering our expenses if we took 100% of the ticket prices and didn't give 50-75% of it to some venue.  Quite frankly, we might even be able to get a larger crowd if the house concert host invited a bunch of their friends.

The more we thought about it, the more convinced we became that with house concerts we could not only optimize the experience for us, but also for the people who came to our shows.

For example, instead of begging a venue to let us play and hoping to get a response AND a favorable showtime when our guests could actually show up, we would be emailing back and forth with our closest network of people and choosing the best time for us and their guests.  On the day of the concert, we'd be able to show up early, have no trouble with parking and unloading the car, have a relaxing setup and make sure that we sound good both in the mains and in our monitors.  We could actually hang out and have conversations with friends, family, and guests before and after the show.  When our show was designed to be quiet, we'd actually be in a quiet room.  We'd be able to set up a merch booth and after putting on the best show we could, feel reasonably confident we would sell merch and get mailing list signups.  We could have a leisurely teardown at the end of the night.

Most importantly, we knew that if we were in control, we'd be able to create a truly magical performance for our guests.  You chat, break bread, sip wine and get to know the guests attending your performance.  There's no physical separation between you and the audience and you can look every person in the eye during the performance.  A house concert is this beautiful symbiotic shared experience. That shared experience means you're not only making fans, you're really making friends of the band.  Not only is this a way to make huge fans, it's really fulfilling and rewarding as a performer and human being.

Our hosts would get to have a party with all of their friends and have the social currency of introducing their friends (that's us) who are in a brand new band to their friends coming as guests.  They'd also get our complete adoration. :)

Put simply, the guests would spend less time and money, we'd make more money, and EVERYONE would have a MUCH better time.

So it really was a no-brainer for us.  Now I'm not saying I'll never play a venue again.  First of all, certain venues are iconic and historic and aside from the honor of getting to play them, they look great in a bio or when trying to book other venues.  And in addition to a stage, lights, and PA already on premises, most venues can seat more people than most houses.  Much as I love house concerts, and I REALLY do, we've done a few that may have worked better in a venue just so everyone could sit in the same room as us.  Also, if you play in a death-metal band, house concerts may not be the right fit for you.  Just be sure to think about your performance and how it would work in a living room or backyard before you start booking yourself.  For acoustic folk-pop, house concerts are amazing.

But then, how exactly were we going to put the whole thing together?  How much would we charge for tickets?  What would we need to do to make this whole thing work?  Well this is way too long so head on over to Part 2 (coming soon!) for some tips on how to actually book and run a house concert. 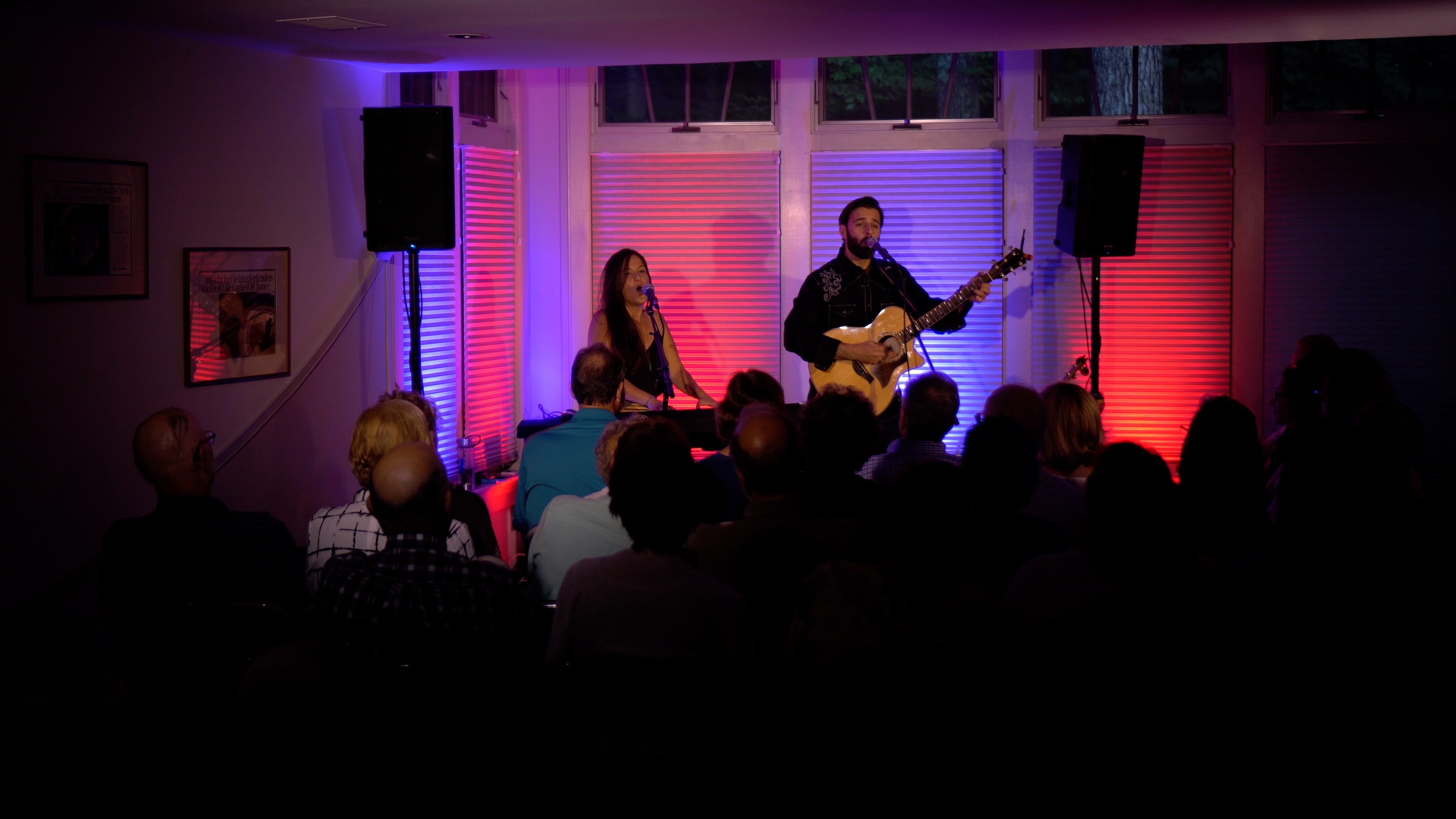